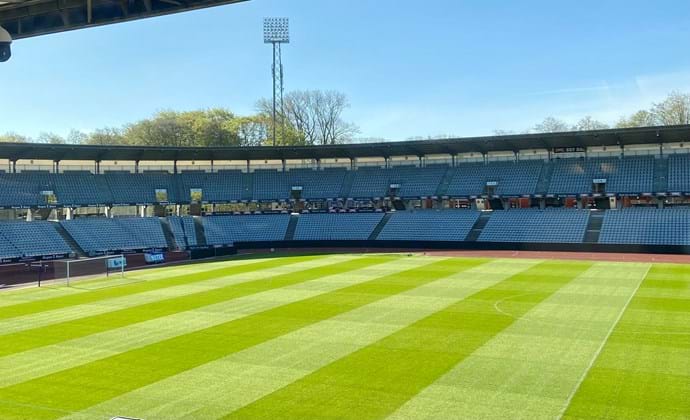 Extract from the Jury Report:

”There is no doubt that the tenderers have put great creative efforts into the work on designing a New Stadium in Aarhus, of which the material shows clear signs. The jury had to take a position on convincing, thoroughly prepared and also very different proposals. All six proposals are consequently outstanding proposals for a solution, and at a very high professional level they have generously contributed to illustrating the design project.

Based on the three evaluation criteria: ”Architecture and functionality”, ”Technology and the environment” and ”Consulting fee”, the jury's task was to find the winner/winners of the design contest.

It is gratifying that the winning proposals also represent three very different architectural approaches to the task. A fact which also holds interesting aspects in the further processing.

The winners of the design contest "New Stadium in Aarhus" are:

The three winners have been selected as equal winners who in various ways have distinguished themselves in a highly positive way in respect of obtaining an architectural iconic building with suitable and optimum functions within the construction limit available.

Proposal no. 1 (Red.: Cobe, AFL Architects, Buro Happold DK) has managed to present a beautiful and functional stadium which, by way of a sympathetic architectural simplicity, adapts to the location and shows relevant understanding of the identity of the location. In addition, the project demonstrates great understanding of working integrated with all technical disciplines, respecting the financial framework given.

Proposal no. 3 (Red.: Zaha Hadid, Tredje Natur, Sweco) distinguishes itself by way of a uniquely strong main concept – beautiful and poetic section, reaching out to its surroundings and resulting in a spectacular experience around the building. The concept and construction of the proposal are found to be extremely robust.

Proposal no. 6 (Red.: Dorte Mandrup, Kristine Jensen, Schlaich Bergermann Partner) is a thoroughly prepared project in which a strong and sympathetic main concept with a clear composition by virtue of the trisection of the building outlines particularly robust and flexible architecture convincingly balancing the iconic status of the building with a sensitive adaptation to the location. The proposal is also based on rational constructions and efficient use of materials.

All in all, the proposal is good and beautiful. The proposal is, however, evaluated as having a high complexity both in form, construction and façade. This lack of simplicity gives rise to concerns among the jurors, and it is assessed that, in the event of further processing, the proposal will not maintain the otherwise smart and sympathetic main concept and also observe the financial framework.

Proposal no. 4 (Red.: SCAU, LYTT Architecture, Buro Happold UK, Cowi) ended in a shared third place together with Proposal no. 5.

All in all, the proposal is good and has been thoroughly prepared. The proposal is, however, assessed to be a too sharp contrast in terms of architecture to the historical facility both in respect of the location, the landscape and the historical buildings.

The proposal is assessed not to obtain coherence between design, cost drivers and buildability.

The proposal is assessed not to be sufficiently robust for tolerating further processing.

The geometrical characteristics and construction of the proposal seem simple, but the scope and dimensions are generally large, which makes the proposal highly more expensive. The proposal is assessed not to be clearly based on the financial framework for construction costs.

The proposal is assessed not to be sufficiently robust for tolerating further processing."